Where do we even begin, it’s the largest gathering of reef minds on Earth, the International Coral Reef Symposium! (ICRS for those of you in the know). Naturally, the story of a massive event like that deserves 2 of the most talkative creatures on Earth (i.e., the authors of this blogpost) aaaaand a cornetfish-long blog post. (For those clueless about our awful joke see Fig. 1c; self-explanatory hopefully 😅?). This event was also the first ever climate neutral ICRS. Anyway, strap in and prepare to hear about how we schooled (another reef joke!!) for a week with fellow reef enthusiasts in the charming city of Bremen, northern Germany.

Figure 1: a): The “Town Musicians of Bremen” – a Grimm’s fairy tale about a group of aging animals who move to Bremen to become musicians and their stack is an unofficial symbol of the city. b): The opening ceremony of the 15th ICRS. c) A blue-spotted cornet fish (Fistularia commersonii).

ICRS usually happens every four years and, after the 2021 edition was turned into a virtual meeting due to the pandemic, the wilds of humanity descended upon the delayed in-person event in order to (while following all health and safety protocols) socialise and discuss all things reef! This cosmopolitan single event had more than 1500 attendees coming from more than 170 countries across the globe, joining online and in-person. 4D-Reef was well represented, coming from across Europe to join with our endemic Bremenites who were helping to organise the event.

Those Bremen-based 4D-Reefers present were:

Honestly, each one of them deserves their own round of applause and their own blog post for that matter, as they have been central to the organisation and success of the 15th ICRS and all behind-the-scenes perks. To all the Bremen 4D-Reefers, we would like to express our gratitude and admiration on behalf of all our colleagues. They have gone to extreme lengths, chaired sessions, organised side events, led visits to their institutes and on top of all that also presented their own research at ICRS. Hats off to you guys!!

The 4D reef delegation was not just composed of endemic folks. We had a significant representation of 4D-Reefers from all over the place who made their way to Bremen to give either poster or oral presentations (check the official tweet from 4D-Reef and the various threads for more deets and super dooper sciency pics and embarrassing moments too – yeah there was a party in the end and yeah we shook it all off till we bleached). As part of the visiting delegation, we had:

If you’d like to have a glimpse at what each of them have been up to, please check out the Official Conference Book of Abstracts by searching their names. 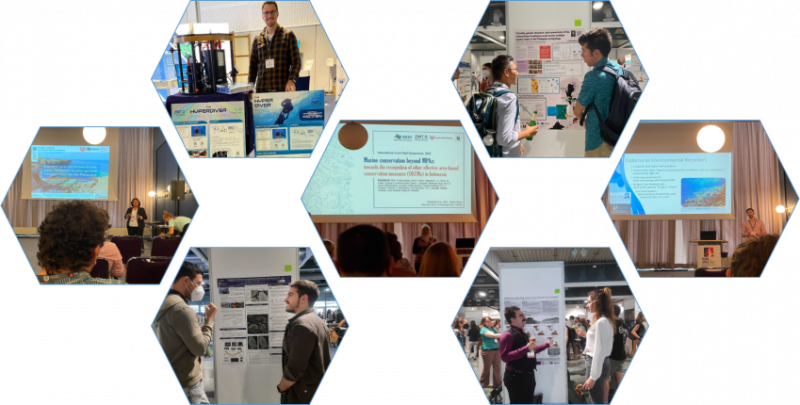 Figure 2: All the 4D-Reef PhDs hard at work, presenting posters, talks and their equipment.
Top row:  Daniel proudly stands next to his Hyper Diver holding up the information posters, waiting to ambush anyone passing by and tell them all about the wonderous imaging that can be done. Andrew gleefully discusses his work at his poster during the poster sessions, enthralling a passer-by with his knowledge. Middle row: Kat dazzles the crowd with her talk on coral reef terraces, scattering pictures of her fieldwork in the Philippines throughout to make us jealous! Estra educates everyone on MPAs and the emergence of OECMs and their benefits. Max doesn’t clam up as he discusses Tridacna shell chemistry! Bottom row: Leo has captured a CT lover and is busy discussing the ins and outs of coral scanning. Will wows those nearby with his remarks on changing coral reef habitats.

Face to face is important: strengthening connections and accelerating collabs

ICRS was a fantastic opportunity for us to present our work to the reef community, and many of the 4D-Reefers had posters and talks at the conference. It was such a nice change of pace to be able to chat to people face to face about science and answer questions from them over a second glass of wine or third bagel. Some of us got to meet up with colleagues from previous endeavours, be it our masters or other research projects. But more importantly got to meet new people, discuss new ideas for research and potential collaborations. We were able to expand our network through our current peers, including friends we’ve been working in close collaboration with from Cardiff University, Imperial College London, Malaysia, Singapore and Frankfurt, as they acted as match makers and introduced us to their own networks. 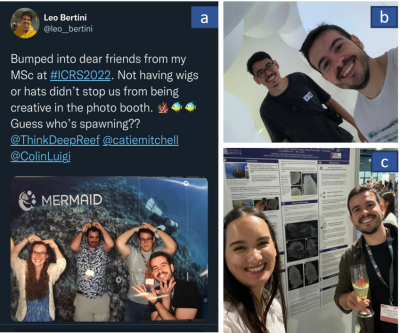 Figure 3: Leo reuniting with and meeting new people. a) Dear friends Catie, Dom Brown and Luigi whom I worked with during my MSc looking at how reefs in Chagos have endured since the 2015 mass bleaching event. b) A fellow Brazilian ICRS attendee, Gabriel Cardoso, a PhD at Frei University Berlin looking at coral geochemical records. I met Gabriel in person after having read from his latest and outstanding work investigating how reefs in the Abrolhos bank were impacted by turbidity caused by mining refuse following the collapse of the Fundão dam, considered the biggest environmental disaster in Brazilian history, more here. c) A prosecco with Sara Todorovic by my poster. Sara and her supervisor Dr Henry Wu, from ZMT, have been my collaborators. They look at geochemical signatures in coral cores from which I am automating the retrieval of growth rates and coral endobiont metrics. 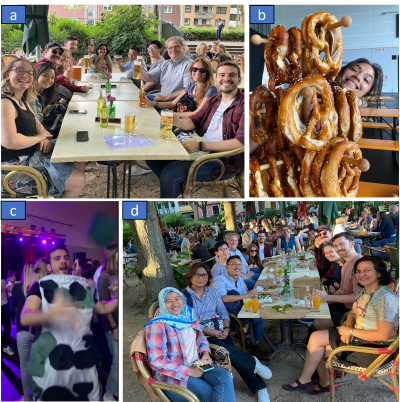 Figure 4: Social gatherings. a and d) The members of 4D-Reef and associates gathered for a beer and food after a hard day of conferencing! b) Allia Rosedy, our Malaysian associate, munching on a pretzel tree. c) Polyp Leo overheating and expelling his zooxanthellae while showing his moves to the beat of ABBA.

The first climate neutral ICRS ever
Given how our reefs have been suffering in the face of anthropogenic pressures, the least we can do to halt global warming is to try and minimize our everyday carbon footprints and this was the mindset behind every single aspect of the 15th ICRS.

For instance, attendees were given free public transport around town, thus encouraging a greener way of mass mobility (our badges acted as public transport passes – how clever of you people!). When it comes to food during either coffee breaks or lunches, catering was also well thought-out and vegetarian (we, being a Brazilian and an Irish, were suspicious of this, given our white-tip-shark-like instincts for blood – another reef joke, it’s been a while). But honestly, food was so outstandingly tasty that we welcomed the menu like sea anemones welcome clown fish.

Figure 5: Post-lunch break in the ICRS poster lounge. That was the best place to chill and recover from our food comas after lunch (left to right: Max, Leo and Andrew- not so satiated apparently?).

Another striking aspect from catering was that priority was given for seasonal and local produce and the next day’s menu included ingredients used the day before to reduce food waste. Speaking of waste, this year there was rarely a flyer or physical promotional goodies around (let’s be honest those often end up forgotten in drawers). The entire programme was available to attendees via a web application, with real time announcements, chat, polling, and social functionalities. Attendees were also encouraged to bring their own liquid containers for drinking water and paper cups were offered as a better alternative to plastic.

Of course, it is impossible to actively reduce our carbon footprint to zero over such a short amount of time. There were energy costs for ventilating the venue, electricity, participant overseas travel emissions and other essentials that we cannot give up on (after all, we will never be as resourceful and energy efficient as corals). For this, organisers used part of the fees to purchase carbon credits equivalent of 1.491 tons of carbon emissions. The purchase is regulated by a third company who ensures measures are put into place to neutralize our carbon footprints following the UN environment programme and the Kyoto protocol.

ICRS was a wonderful opportunity to not only showcase the incredible work we’ve been doing as part of 4D-Reef and to bring awareness of how important turbid reefs are, but also to get new perspectives and connect with an amazing swarm of both young and well-established scientists from across multiple fields.

The conference was an opportunity to celebrate our endurance over the hardship the pandemic has brought onto the community, both as a whole and for some at deeply personal levels. Throughout the event, we shared (and vented – because we’re all human) about how we managed to stay afloat through such murky times. There was a moment to remember all the loved ones we lost along the way since the last in-person ICRS. May we continue their legacy and make the remaining reefs proud of what we do to protect the oceans!

The 15th ICRS has definitely set the bar high for any upcoming conferences. We already look forward to the ingenuity that will come with the 16th ICRS, which will be in New Zealand (i.e., land of Erica, land of the kiwis and the Maori).

MSc in Taxonomy and Biodiversity