Microcosms in action – blog #2 of Tamara

Microcosms in action – blog #2 of Tamara

Blog by Tamara Stuij, PhD-student of 4D-REEF at the University of Aveiro, Portugal.

As the whole experimental part of the work is all set and done by now, I look back at the first blog I wrote about the microcosms with a little melancholy. It was a great experience to get the system running and I’m excited to share with you what it looked like & how we put it to work.

As mentioned in the previous blog, the plan was to spike life coral reef sediment with sterilized carbonate sand to obtain a coral reef sediment microbial community. In practice, this meant that as soon as we received the freshly collected sediment from a coral reef in the Indo-Pacific (Many thanks to Prof. Yusheng Huang, our dear collaborator from Taiwan), it was time to start the experiment. As planned, we mixed the sediment with sterilized sand and added it to our systems. After addition of the sediment, the microcosms were filled with either clear artificial seawater, or seawater enriched with humic substances. Terrestrial derived humic substances are a form of coloured dissolved organic matter that is brought into coastal marine systems by land and river runoff. These substances can be a large reservoir of the organic carbon and nitrogen in coastal tropical reefs and by their yellow-brown colour, they can change the light spectrum and intensity in the water column. In our experiment, we hypothesized that humic substances can mitigate the impact of elevated temperatures and ultraviolet radiation (UVR) on coral reef sediment prokaryotic communities, leading to possible increased reef resilience. 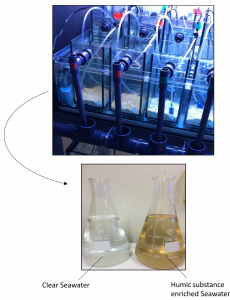 Figure 1 Upper picture:  Microcosms right after we added the sediment and water. Lower picture: Daily water renewal to the systems.

To facilitate initial microbial colonization of the sediment, the microcosms were left with only the water and sediment for the first week. After this first week, it was time to add some more life to the aquaria: the corals and sponge! The fragments were dispersed over the aquaria so that each aquarium contained one fragment of all species. Now the systems really started to look like tiny coral reefs. To make the animals and microbes feel a little more comfortable, and to let them get used to the humic enriched environment, we left the systems under the same conditions for another three weeks.

Just when the species adapted to their new tiny environment, it was time to impose our temperature and light treatments.

To keep the microcosms at ~28ºC, each four microcosms were surrounded by temperature controlled water baths. For our treatment with higher temperature, half of the water baths were gradually heated up to 32ºC.

To mimic reef light conditions, fluorescent lamps which covered a broad light spectrum were turned on for 12 hours a day, with a gradual increase in intensity at the beginning and end of a day. Additional, in the middle of the day, special UV lights were turned on for four hours to mimick the UV radiation given by sunlight. To assess the effect of UVB light, we exposed part of the microcosms to the UV radiation, whereas filters that specifically filtered out the UVB wavelengths were placed on top of the control aquaria.  In total, we set up 8 different treatments over 32 aquaria to investigate the individual and interactive effects of humic substances and reef stressors. 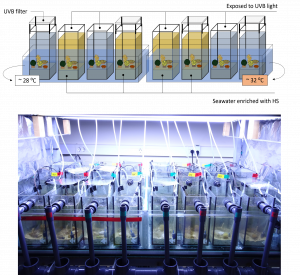 During the experiment, we were constantly monitoring and measuring water quality parameters like the temperature, salinity, pH, dissolved oxygen concentration and nutrients. To look at the bacterial communities in the system, we sampled the sediment and water at different timepoints and at the end of the experiment. The corals and sponge were all sampled for bacterial community analysis at the end of the experiment. As you can see, I was a little bit tired at some point. Luckily, I had some great help at the day of sampling! At the moment the samples collected are being processed, and when finished, we can analyze the data and get insights into the effects of our treatments on the bacterial communities. 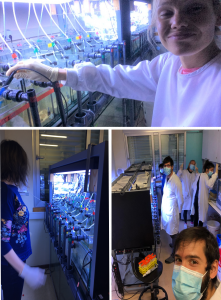 Figure 3 Upper picture: Me, measuring salinity levels at eight in the morning. Lower pictures: The sampling team: Davide Silva, Antonio Louvado, Rita Polonia, Vanessa Oliveira and me in the back.