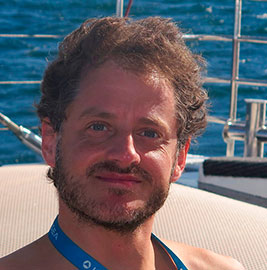 Roberto Giudici lives in Salzburg (Austria) and works at Ocean Maps, a company specialized in geomorphic environmental surveying and 3D mapping. He completed a Master in Computer Science at the University of Turin and a Master Degree in Geomorphological sciences at the University of Southern Brittany (France). Besides his IT background, he is specialized in geomorphic simulation algorithms applied to hydrodynamic and hydro-sedimentary coastal and lacustrine land-systems.

He is aimed in providing a comprehensive interactive 3D reconstruction of the 4D-REEF research sites, along with a graphical representation of their results. He will also be charged to make a detailed topographic and bathymetric survey of some sedimentary and coralline ‘hot spots’. Nearshore to offshore surveys will be held in collaboration with other 4D-REEF ESRs, in the effort of getting a better insight of estuarine influence on turbid reefs at Holocene pristine environmental conditions.

Ocean Maps, a privately held Austrian surveying company, is a beneficiary of the 4D-REEF programme hosting one of the Early Stage Researchers, Roberto Giudici. They