I had a closer look at some of the samples that Prof. Willem Renema’s team from Naturalis sorted for me. Without doing any analyses or anything, there were already so many clues about how the conditions were in oceans 200 years ago and how these corals were growing, which is very exciting!

One of the samples I mentioned in the previous blog post was a sample which showed high rates of bio-erosion or ‘endobiotic occupation’ (sample 1 on Figure 2 below). This is likely a result from Christmas tree worms, often very colourful and exotic! The name Christmas tree worm does not derive from its ecology but more its appearance of brightly coloured crowns that radiate a tube-like body, essentially looking like a Christmas tree! These worms are sedentary, so they often find a place, such as on a coral and don’t move around much from that area. 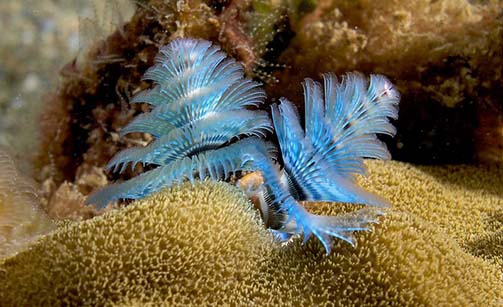 An interesting relationship
We believe though that the term bio-erosion in this case is not really the appropriate and accurate term to give to this interaction between the coral and the Christmas tree worm, as bio-erosion suggests that the effects are detrimental. In this case, we prefer to use the term endobiota as the Christmas tree worm is not causing a detrimental effect on the coral as it may have been removing the sediment from the top of the coral while also aiding in the coral’s nutrition. In fact, many coral endobionts, such and endolithic algae and sponges, can actually be important for corals, especially in times when the coral is bleaching as they can provide important additional nutritional sources and give the corals an upper hand to welcome new zooxanthellae when recovering from bleaching events.

What’s in a shape?
Another interesting observation from my set of samples (Figure 2), is that the sample indicated by number 1 in the photo is very spherical in shape compared to number 2, which is very bumpy. The spherical shape suggests that light and sediment conditions were very homogeneous and so the growth of the coral is homogeneous. Lumpy corals (such as specimen 2 in the photo) suggest that there were differences in environmental conditions such as light availability or sedimentation which led to different growth rates in different parts of the coral. Additionally, when a coral is bumpy, sediment accumulates in the crevices a lot more than in spherical corals so this gives us a lot of information on the conditions in which the coral was living and the different strategies they adopted in order to grow in different environments. 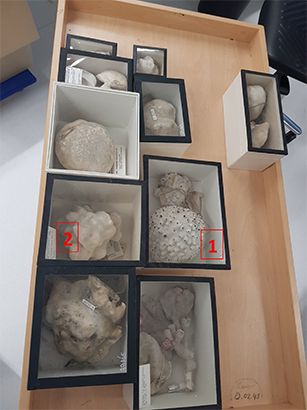 Figure 2: Set of massive Porites specimens from the Naturalis collection.

It is so interesting that just by looking at these historical specimens you can already decipher a lot about the conditions that these corals were living in, giving us important information on how the oceans were 200 years ago! Looking at these specimens from Naturalis has already been incredibly exciting and I hope to unravel some more interesting facts about the history of these corals in the next blogposts to come!